Staking: Is that the new wagering requirements?

by Marcus
3 years ago

The Gambling Commission recently fined Betfred £322,000 for money laundering. The case involved a punter who had deposited £220,000 in November 2017. The player went on to lose £140,000, over twelve days. Not so lucky. And even more unfortunately for Betfred, the money turned out to be stolen. The punter had been sentenced for carrying out a £2M fraud, but had set up several accounts with casinos, and was having a high old time spending the money. Until someone tipped off the UK Gambling Commission.

Betfred has agreed to pay some restitution to the victim of the crime. Meanwhile, it’s attempting to line up on the side of the smaller punter, by offering a “no wagering requirement” introductory bonus of free spins for a £10 deposit. The promo strapline is, “It couldn’t be simpler.” It depends on your definition of simple, but five lines of conditions up front, followed by 26 paragraphs of more terms and conditions, aren’t most people’s idea of straightforward. The T&Cs are revealing though, as they introduce an increasingly common concept, the “staking requirement“.

How high stakes are you allowed to take?

Instead of a wagering requirement and the need to spend 5 to 50 times the amount of the bonus before you can draw any winnings in case of “normal wagering requirements”, you now have a cash staking amount, that has to be spent within a certain amount of time – usually seven days. For example, to get 50 free spins from Betfred in this promotion, you need to stake at least £10 on slots included in the promo. (Good for fans of Playtech’s Age of the Gods, as nearly half the eligible slots are titles from this series). That said, it’s a better deal than the usual wagering requirements.

Many of the mainstream large casinos have caught onto the fact that players hate wagering requirements. And they’re also aware that some of the European gaming authorities are beginning to take a look at the conditions attached to some of the deposit bonuses that are being offered. So you’ll now see “no wagering” plastered over various casino promotions. But that offer is frequently confined to new players, and is being used as an incentive to get people to sign up. In some cases, once you’re in, it’s a case of same old, same old, and for any other promos, the wagering requirements are back.

There’s also a good rule of thumb, that the higher the bonus, the more restrictive the terms and conditions will be. “No wagering requirement” online casinos tend to offer much more modest bonuses. Perhaps not surprisingly, The Guardian reported recently that over the past five years, complaints against online casinos have risen 5,000%. Considering that over 1000% new casinos has been launched the past five years and over 200 000 new players have entered, the numbers are not that extreme.

Players tend to turn to the review sites to find out which are the best casinos, but surprisingly, many of the mainstream casino review sites ignore this issue. For example, one of the largest general review sites, has 65 pages of casino listings. Yet it doesn’t consider wagering requirements, in its casino rankings – despite the fact that this is one of the most important features of the casino as far as players are concerned. So for a more objective view, you can use a site like this one, which doesn’t ignore the wagering requirements problem, and will keep you up to date with the latest developments – like staking requirements.

Below you see the top three best casinos right now from our no wagering toplist.

" Try a better new cashback casino with 20% return every week." 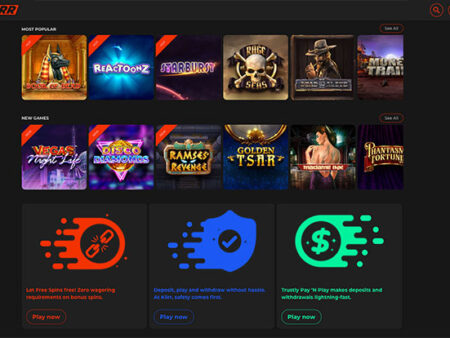 Latest News
Klirr in the the Wallet: Zero Wagering
2 years ago